An Introduction to Transfer Switches: Single Phase and Three Phase

What is a Transfer Switch? 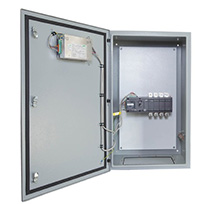 If the Transfer Switch did not change the load from the utility to the backup generator system, all kinds of havoc could ensue due to “back-feed”. Back-feed occurs when power travels back through the utility lines – which in the case of a blackout, could cause fires, damage your generator system, and endanger the lives of utility workers who are expecting the power lines to be dead.

Transfer Switches are designed for both Single Phase and Three Phase diesel generators, and in general, the two stay in their respective realms. In case you are asking yourself what the terms “Single Phase” and “Three Phase” mean, here’s a quick lesson to help you distinguish between them.

In more technical terms, a Single Phase generator system carries alternating current in which the supply voltages vary together.  A hot wire carries the electrical load, while the neutral wire (or ground wire) returns the load.

Phase system operates much like if you were riding your bike, but instead of two legs, you had three legs with which to pedal. With three legs and three pedals, there is never a moment in which all three pedals intersect at the bottom or top of the wheel – providing a smoother ride.

As you’ve guessed, generator installation can become complicated quickly. The good news is that Generator Power has your back. Our experts are available for consultation, ready and willing to help you find the genset that meets and exceeds your needs and expectations. In the meantime, look for more articles here to help you find the information you need to make an informed choice.

A word from the editor

My name is Aaron Robins, I’m the sales manager at Generator Power. I have been in the generator game for over 10 years. I have supplied generators to residential and commercial clients for a wide range of various uses. My aim in writing this short article it that I may be able to arm you with the right information in order to help you make a wise decision. There are many people who make poorly informed decisions in my industry. This commonly results in loss of finances, wasted time and bucket loads of stress. I believe in doing a job right the first time and with as little stress possible. As a result I aim to educate potential customers so that people avoid these issues before they happen.

Contact Generator Power and let us run through our Generator Needs Analysis in order to help you make the right choice up front!

If you’d like to know more about our generators, book a service on your current generator, have us assist scoping your project, or want a better deal call now 1300 767 257 we’re ready to do business.

Our business has been built around the supply, installation and after-sales support of trusted quality brands for a wide range of markets and applications.
Read more.